Men would still be shaving every morning with old-fashioned cut-throat razors if not for the invention of an American, King Camp Gillette (1855-1932).

A travelling hardware salesman working in the mid-west of America, Gillette was shaving one morning in 1895 when he decided that his conventional long-bladed razor was neither  efficient nor safe. He noticed that only a short length of the opened blade was used, and he considered how dangerous the razor was – it could, literally, cut a man’s throat. And as a busy man, Gillette disliked wasting his time stropping the blade to sharpness. 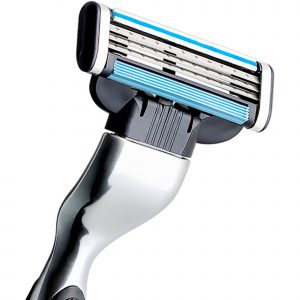 Why not, reasoned Gillette, create a razor blade which never needed to be sharpened, was just the right size to shave a man’s face, and was cheap enough to be thrown away when it wore out. Gillette recalled, also, the words of his former employer, William Painter, who invented the disposable crown cork. Painter was an inventor and businessman who believed that if you could make a product which people would use and then throw away, they would keep coming back to you for more.

Gillette and an engineer, William Nickerson, eventually perfected the double-edged safety razor blade, which fitted into a specially designed holder with a handle and an adjustable head. The carbon steel blades were guaranteed to stay sharp for 20 shaves, and were sold in packs of 12.

Gillette set up his Safety Razor Company and patented his razor in 1901. The first razors went on sale in the USA in 1904. Available from jewellery shops, chemists and ironmongers and also the new department stores, the razor and blades were sold together in boxed sets. The original razors had silver-plated handles, and even more expensive models were plated with gold.

The initial sales proved disappointing, however, and the company carried out an advertising campaign in newspapers and gentlemen’s magazines in the USA and Europe to make the public aware of the new invention. By 1906, sales of razors had reached 90,000, and 12 million blades were sold.

Gillette’s picture appeared on the packaging until recently, and he became world-famous and rich.

The safety razor and blade have changed very little in design from his original, although some razors are now made of plastic and are, themselves, disposable.

Many thanks to Vanilla Circus for all of their back link profiling and advice. We greatly benefited for your advice and can see why you are supreme in the market at what you do, thanks!